The piano and the precursor organs 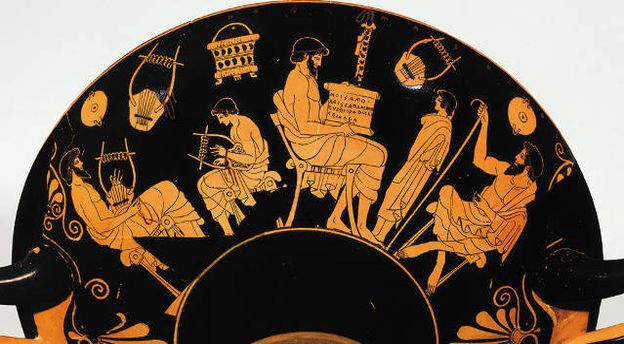 we see ahead of a musical box with many wire strings inside, while the exterior facade features a keyboard with white and black keys. Apart from the strings, in the box there are an equal number of small hammers which are connected to the keyboard. Every time I press a button then the corresponding hammer pounding on the string next to it, so the consecutive keystrokes cause successive continuous sounds, which in turn make the wonderful melody of klavitsempalou. Yes, and yet it was so simple!

With the years klavitsempalo further improved and renamed "Pianoforte" and later became the familiar piano, taking different forms, depending on its use and the space that was put.
Inventor of the piano so as we know it today, is the Italian Bartolomeo Kristofori. Born in Padua in 1655. He came from a poor family and since childhood he learned the art of making musical instruments.

K n so 18th century, the piano became a king of musical instruments throughout the  Europe and gave rise to meet some of the greatest composers of all time, like Bach, Mozart, Haydn and Clementi. But later in the 19th century, when the music philosophy of European societies formed a more lighthearted style, highlighted some young composers that marred their work not only their time, but also the entire history of music. Among them will distinguish Beethoven, the Schubert, Chopin, sumo, the Mentleson in Brahms, Tchaikovsky and Liszt.
King of the institutions within the Liszt, percussionist Emperor senses when Prokofiev, integrated form percussion instrument, in Millau, the enigmatic box with long strings when Snitke with as little words this is the piano!

In America the piano won hundreds of thousands of friends and became the favorite companion not only for wealthy families who lived in affluent states in the east coast. At the same time became a means of entertainment that dominated the saloon of the South and the Central States.

The j pianists highly regarded among the patrons, which in most cases were workers who gather for a drink after a hard day's work. The great fatigue but bring fights and those who ultimately pays were pianists who were unwittingly embroiled in the fire the patrons (from there seems came and "Do not shoot the pianist").

T he problem with the years became increasingly larger, and the owners of the saloon had to find an effective solution, but to deprive patronized by melodic piano company.

T Now when we discovered the «player piano», namely the automatic clockwork piano that effectively "defeat" the pianist because the operation was based on the existence of a paper roll inside, which had up many metal spikes. Every time rewinding the reels start spinning while a needle touched successively onto the pins, producing a sound that is very much like the notes of a piano. The bigger the cylinder was the more fit pins and thus sounds more musical pieces.

K n the 30s Clockwork piano became more and was replaced by electricity, which operated cassette playing a default repertoire. The next major improvement came in the early '80s, and reinforced by the invasion of computers in our daily lives.
Piano But in my very humble opinion will not overcome nor never be replaced by any "CDROM" none "mp3" by any digital means anyway. Just think how many of you who read this tribute you visit a music scene to listen to this unique instrument LIVE to caress your ears.

T he piano can deliver music either as a solo instrument or instruments in an orchestra. Although many believe is mainly used in classical music, the piano has a particularly important role in jazz, the blues and rock and roll, and on the popular music where either dominates or works as an aid to other organs. It is also used by many contemporary composers to "write" music (Eclectic, Folk, Pop, etc.).

Shaun the operation of pressing a key on the string that represents the "hit" a soft felt-covered hammer that returns back into place when the chord is struck.

R piprostheta piano has two pedals and bottom in the center in height of the tread. The left is slow: pressing, pulled a lever that moves the hammers closer to the strings so the sound is clearly siganoteros. The right pedal called pedal-lasting or strong pedal lifts the silencer from the strings and keeps the sound.
In category anymore Owns This instrument is a bit difficult to classify because somewhere theory and percussion and strings, a sufficient class is the clavier. In a symphony orchestra, however, belongs to the strings.

The keyboard instruments carry keys, arranged in a keyboard. During the Baroque era the most popular keyboards was the organ and harpsichord, while the Classical era the pianoforte (piano). The keys are a smart and practical mechanism by which simplifies the way to play some complex organs. Besides the keys, which is common element in these organs, each clavier produces the sound of a different way. Aerophones Keyboard is the Institution, as the sound is produced by air vibrating in pipes (tubes).

Strings Keyboard is the harpsichord and the pianoforte, as the sound is produced by vibrating strings, ie echogenic body are strings. In the harpsichord strings pecking (Nyssa) from a spike in pianoforte subjected to impact by a hammer. The most well known ancient clavier is hydraulis of Ctesibius, constructed in the 3rd century BC The hydraulis operated by hydraulic system.