«In the whelp cave manger of horses King of heaven n 'poet of all.

The traditional custom of carols at the Twelve in Greece. "

T being the last month of the year in December we meet Twelve of the holidays. In this Twelve have three major religious holidays: Christmas, New Year n 'Epiphany. 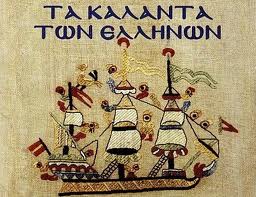 A ccording to the folk tradition in every corner of Greece encounter beliefs and traditions. It is worth mentioning the decoration of the Christmas tree or ship, exchanging gifts, preparing special foods and sweets from housewives. So another Christmas tradition is that of carols, songs that remind us - announcing the advent of a joyous celebration. Through carols express greetings to friends, relatives, neighbors or even family members. Carols - Kolienta - Kolianta - Kolientra

The word - Carols - comes from the Latin word «calenda» means the beginning of the month. So the configuration of the Greek verb we call carols, songs that have as their purpose the transfer of a message (the birth of Christ, the coming of the new year, the Baptism of Christ).

The history of carols but also linked to ancient Greece after they found tracks similar to the current carols where children in those days in honor of the god Dionysus holding a model boat or sometimes olive branch laurel decorated with fruits and white wool, went from house to house singing and taking bids households. Then the custom of carol passed in ancient Rome as in Byzantium where children - young holding sticks, lanterns, models decked boats sang with the accompaniment of a drum, tambourine or triangle. Even today Pontic intact save this tradition.

T he carols are based the old folk songs, with wishes for the homemaker, housewife and family members. Also kalantarides or kalantistades expressed wishes for friends and neighbors. The singing of carols and even nowadays is an act of sacred ritual significance, since according to popular perception has resulted in health and prosperity. The kalantarides sing on Christmas Eve, New Year and Epiphany morning or evening holding lanterns, drums, triangles, tambourines and other musical instruments that accompany them. Children or young people sing alone or as a choir in order to reap the "good hands with" as they say in Crete tip or the "kalocheridia or goodies", ie any kind and sweet goods such as eggs, fruit, fruit dry transformers Mr. A.

"Kalin Esperan lords though is your definition of Christ's nativity say f 'mansion. Christ is born today in Bethlehem, the city rejoices skies, greet 'the whole nature. Apse, vagitsa, beeswax, apse and dipleri and sit and ntouchountize Ida would have brought us apaki or c-, c-or sausage, pork or c-bit gamma or black hen no avgoulaki though he did it and Galani , let Zevgaraki. Bring Panier chestnuts, Panier LEPTOKARIA and bring and sweet wine to drink lads. And if the will my white dove opened the door to say good evening. "

M means from the lyrics of these songs we observe that kalantarides to Thrill "the Master" and "horns" say too much "praises" ie praise and cosmetic characterizations for all members of the family in order to convince the landlord and Housewife give them more and richer gratuities.
The main purpose of kalantiston is intercourse with his friends and that is why kalocheridia are intended concentration of those in need for the team potluck usually follows.
Carols as mentioned above, are songs but which have entirely their own essential characteristics. The songs are made by the people, based on the particular mores that has any place in the Twelve Days of Christmas.
Worth mentioning some features such songs:

"Aradiasteite emprepa all the line to say politely n songs 'like' our boss. Our boss is good in the world paradeigmenos And in the middle of the neighborhood post Malamatenios. Let it 'many years you live to happiness no time like today what you desire. "

I Danish carol is for all our children, who are and will continue these delivery.